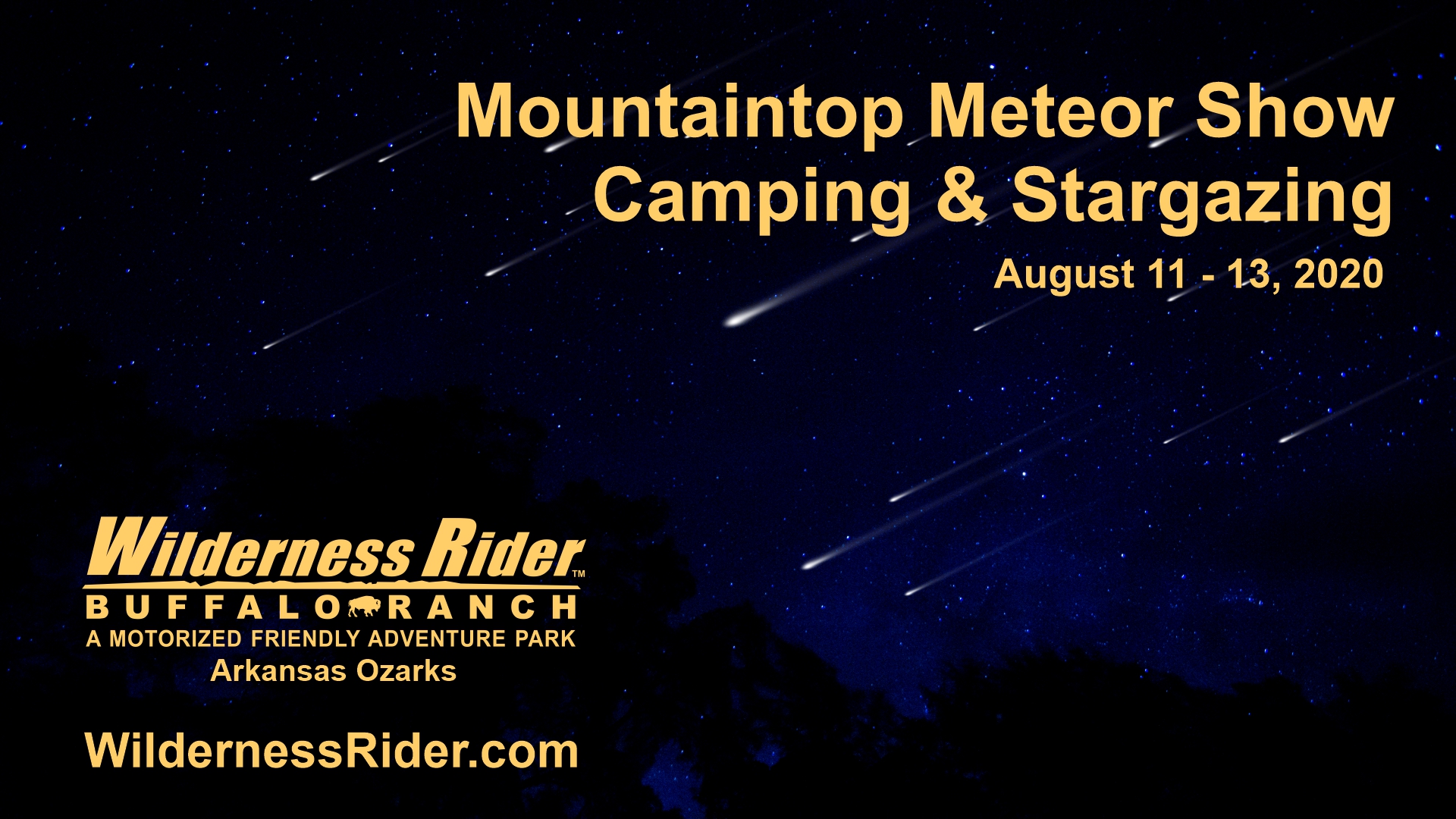 August 11th to 13th
Come for a night or come for the week!
Mountain Top Meteor Event – Come experience the zenith of the Perseid Meteor Shower atop an official Dark Sky Viewing Area at The Wilderness Rider Buffalo Ranch.
We have reserved a special mountaintop with plenty of room for social distancing for you and your family to viisit for the evening or bring your tent and spend the night.

You still might see up to 40 to 50 meteors per hour at the shower’s peak.

Overnight Camping or visiting is just $15 per person.
We are setting aside a special area just for Stargazers and ask that everyone in this area be especially respectful of keeping any light to a bare minimum.

Rather visit over the weekend? No worries! The showers peak on August 11 to the 13th, but the Perseids Meteor Shower is happening well before and after those dates. So you can certainly come the weekend before or after and still catch plenty of the show! Shoot for the stars and stay all week!

The meteor shower gets progressively intense after midnight during the wee hours of the morning – so plan on bringing a comfortable lawn chair and your overnight gear.

The annual Perseid meteor shower is one of the most beloved meteor showers of the year, especially in the Northern Hemisphere, where the shower peaks on warm summer nights.

The 2020 Perseid meteor shower will probably produce the greatest number of meteors on the mornings of August 11, 12 and 13. On the peak mornings in 2020, the moon will be at or slightly past its last quarter phase, so moonlight will somewhat mar this year’s production. But the Perseids tend to be bright, and a good percentage of them should be able to overcome the moonlight.

While people tend to focus on the peak mornings of meteor showers, and that’s entirely appropriate. But meteors in annual showers – which come from streams of debris left behind in space by comets – typically last weeks, not days. Perseid meteors have been streaking across our skies since around July 17. We’ll see Perseids for 10 days or so after the peak mornings on August 11, 12 and 13, though at considerably reduced numbers. Yet, each day as the moon wanes in the morning sky, less moonlight will obtrude on the show. Starting on or around August 17, moon-free skies reign all night long.

In the Northern Hemisphere, the August Perseids is ranked as an all-time favorite meteor shower of every year. This major shower takes place during the lazy, hazy days of summer, when many families are on vacation. What could be more luxurious than taking a siesta in the heat of the day and watching this summertime classic in the relative coolness of night?

Don’t rule out early evenings, either. In a typical year, although the meteor numbers increase after midnight, the Perseid meteors still start to fly at mid-to-late evening from northerly latitudes.
If fortune smiles upon you, the evening hours might offer you an earthgrazer – a looooong, slow, colorful meteor traveling horizontally across the evening sky. Earthgrazer meteors are rare but memorable. Perseid earthgrazers appear before midnight, when the radiant point of the shower is close to the horizon.